It’s been a decade since Martin Scorsese unveiled his noir psychological thriller, Shutter Island, and it’s hard to deny that its twist remains one of the most interesting left-turns in modern American cinema.

So to celebrate the film’s anniversary, let’s take a look at the fascinating puzzle pieces Scorsese carefully laid out while turning Federal Marshal Teddy Daniels’ world upside down. This is your obligatory spoiler warning.

How did Scorsese craft the twist that Teddy is really a patient at Ashcliffe hospital called Andrew Laeddis, and that the entire mystery was fabricated? 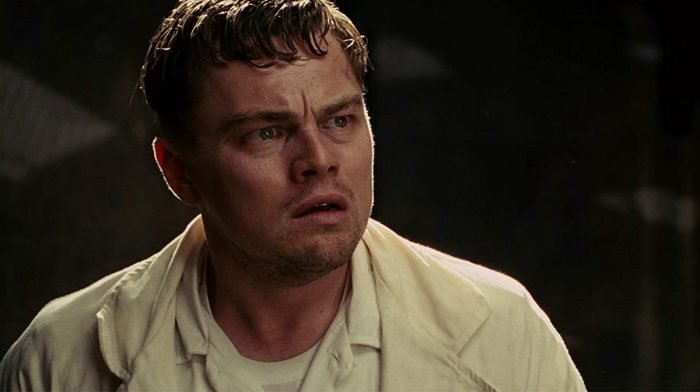 Well the first part’s relatively easy. By casting such a well-known and likable star in Leonardo DiCaprio as Teddy, the audience is instantly disarmed by following the story through his viewpoint.

But that’s simply the first layer Scorsese uses to lull the audience into a false sense of security.

The film introduces Teddy and his partner Chuck (Mark Ruffalo) as they head to Shutter Island to find a missing patient, Rachel Solando, who has seemingly disappeared into thin air. The reason for her incarceration? She drowned her two children. Bleak.

Given that the pair are supposedly figures of authority and they’re (initially) trying to solve a mystery outside of their personal lives, the audience has no reason to suspect anything different than what’s being presented on screen. 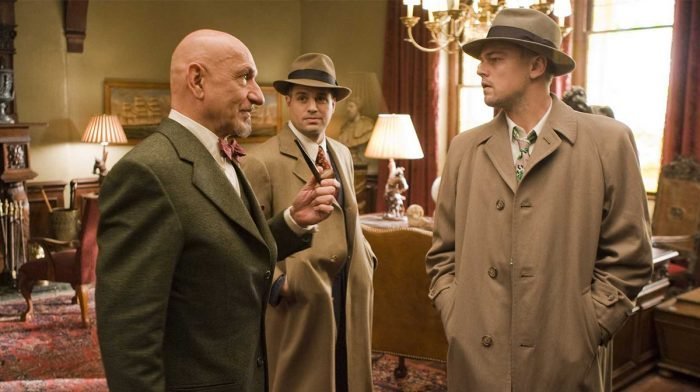 And so we’re whisked away into Scorsese’s unsettling exploration of a splintered psyche affected by an unimaginable level of grief.

The other side of the puzzle is that ‘Teddy’ lost his entire family in a fire set by ‘Andrew Laeddis’, an arsonist.

Instantly, the two stories of family deaths are tied by being the opposite of each other – one set drowned while the others burned – hiding the truth that only one family died: Laeddis’. 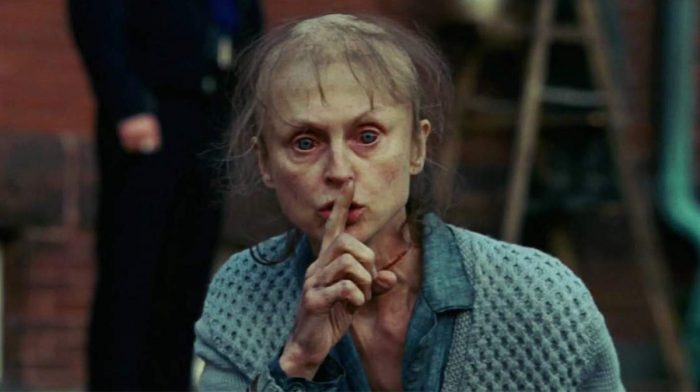 But what puts Shutter Island’s reveal up there next to other iconic plot twists like Fight Club’s Tyler Durden or The Usual Suspect’s Keyser Söze?

Mainly, the sheer scale of the set up. It’s as if Scorsese has created a demented take on Secret Cinema: everyone has their role to play around a singular narrative that creates a new world hoping to give someone a meaningful experience.

While Secret Cinema lets fans live the world of a film, the Ashcliffe staff are trying to bring the real world to Teddy/Andrew. 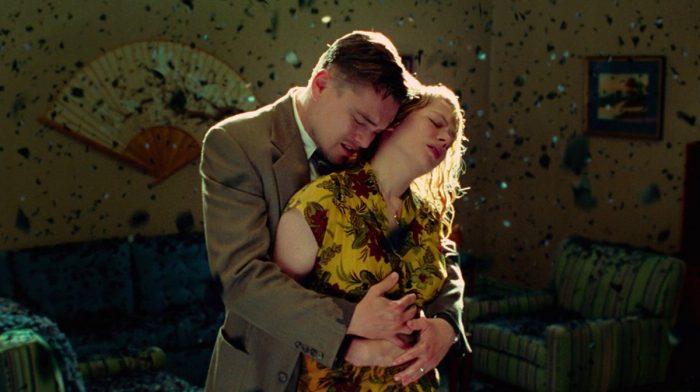 Although it seems like a generic play from the Agatha Christie school of mysteries, having everyone in on it aside from the viewer means that Scorsese is working against the audience with resounding effect.

It doesn’t seem possible that Teddy’s story is false because he’s being enabled by those around him. The rest of the supporting cast keep Teddy’s fictional persona in check by constantly referring to him as ‘Marshal’.

And where Teddy can’t provide an answer, like where his report on the incident will go, Chuck/Dr. Sheehan steps in to back up Teddy’s ‘credibility’. And once more because of the excellent casting, we automatically trust Mark Ruffalo. 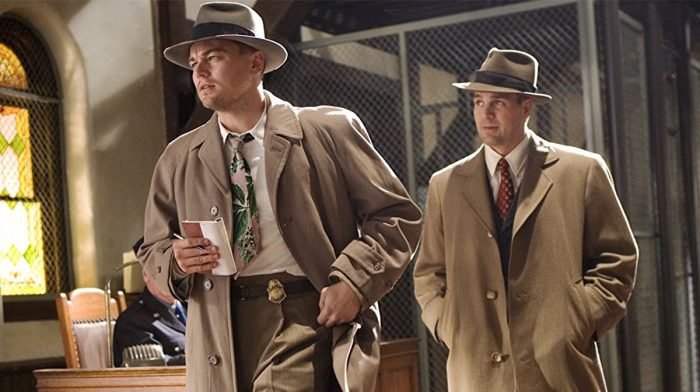 The film further hides its twist by layering it under the beautifully intense hallucinations of Michelle Williams’ Dolores burning to ashes in front of Teddy.

Whether it’s the close-up of DiCaprio’s tortured gaze as Dolores reels off clues about the missing patient and tells him he can’t leave the island (literally, he can’t), to the ash raining down on the pair, they’re some of the most haunting moments in the film.

There’s also the stark contrast of the jarringly bright colours compared to the bleak and stormy island, that really points out the manic nature of Teddy’s mind.

Dolores even tells Teddy that although everyone insists Laeddis isn’t on the island, he is. How would a hallucination know something like that? These visions are clearly the effect of the fabricated mystery forcing Teddy to confront his true self – so think of them as horrifically helpful in his recovery. 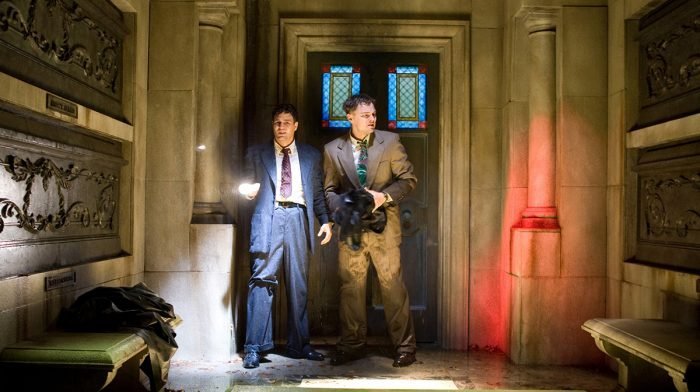 Following Teddy’s earlier reveal that he’s here to find the (fictional) arsonist that killed his wife, he subtly told the audience the entire point of Shutter Island.

The fictional mystery is an attempt to force Teddy/Laeddis to find his personality and confront the crime he committed: killing his wife after she drowned their children.

But Scorsese couldn’t just leave it there, he has to twist that emotional knife even further in and explain that Laeddis has already gone through this theatrical therapy, nine months before the events of the film.

Even then, there’s a tragic undertone to the final reveal, by showing Laeddis has regressed back to the comfortable safety of his conspiracy-obsessed personality. To quote J.M. Barrie – ‘All of this has happened before, and it will all happen again’. 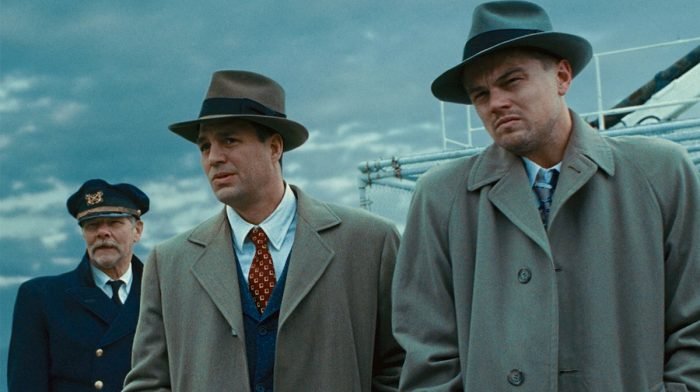 Scorsese’s mournful noir-mystery is stuffed like a Russian doll with twists, and while it might seem a little convoluted to begin with, it packs a punch when it’s clear how broken Laeddis has become.

Although seeing Teddy/Laeddis led away to be lobotomised doesn’t have the same emotional punch the second time around, it’s hard not to marvel at all the puzzle pieces that are continuously left in plain sight for the audience’s interpretation on repeat viewings.

The final few minutes undoubtedly prove Scorsese’s versatility as well as DiCaprio’s, and Shutter Island should be celebrated more than it already is.

The Countries That Play The Most And Least Magic:…

Ms. Marvel Finale: How It Sets Up Kamala…

Warwick Davis And Jonathan Kasdan Reintroduce Us To Willow